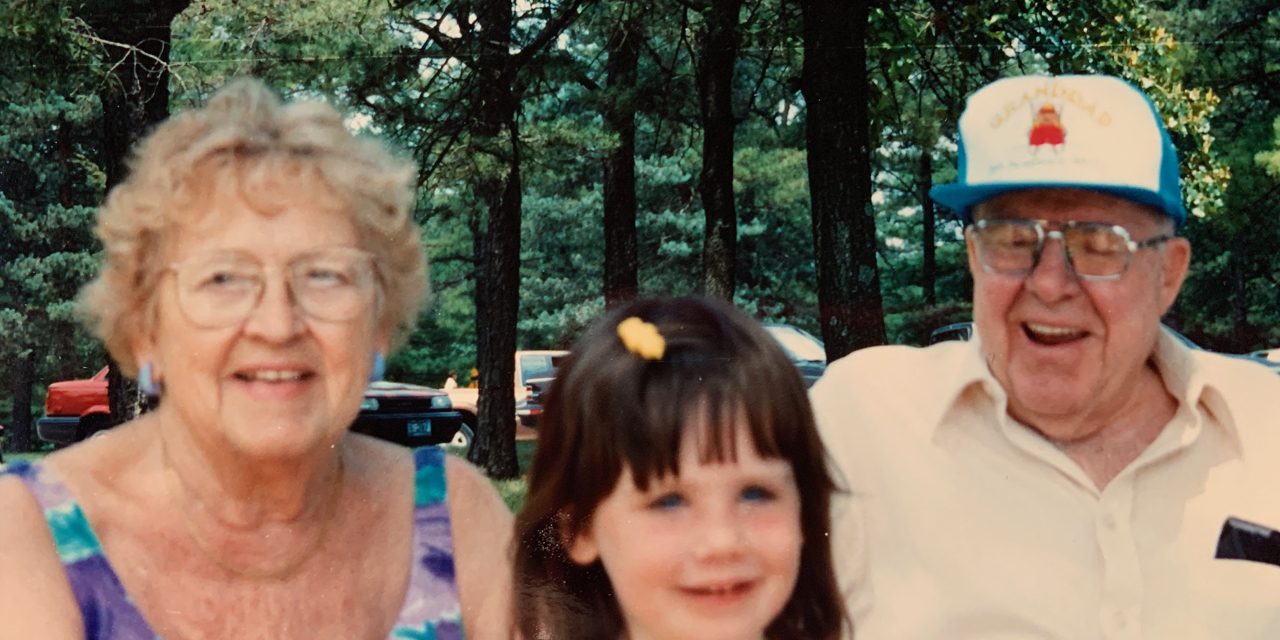 She taught me how to plant pansies. We planted them around the rectangular patio made up of pink and white cinder blocks behind her house. I suspect we did the planting in a manner that causes me to cringe today; in neat little rows, with linear aisles, and nothing organic about it.

Grandma and Grandpa lived in Clark, New Jersey and had an above-ground pool, about four feet in depth that I spent countless, endless, forever hours in, only departing the underwater heaven if lightening was evident. I fell asleep, it seems like always, chlorine soaked, with my too-small windows open, and smiling. To this day, chlorine pools smell good to me. Their suburban subdivision was what I would consider a neighborhood nightmare today, but back then the homes where all the backyards blended into one another and provided the most spectacular playground for every child in the neighborhood was heaven. This was long before pools had to have a fence around them to make sure no one inadvertently went for a swim uninvited and drowned.

Grandma made me poached eggs and taught me which side the fork went on when setting a table. She smoked for awhile, but quit when Grandpa had a massive heart attack and needed serious life altering changes, though perhaps she quit even before that, I just don’t know. I remember when they bought a car overseas, and I thought it was the coolest car ever because it was a Saab and had Swedish plates.

My mother became pregnant with me at 16, which resulted in marriage with my father. They were mere children. I was the one. My arrival forced and pushed so many people into places they might never have gone.

My parents brought me into the world to live with my grandparents. I still thrill to being in the presence of old people drinking cocktails, tapping cigarettes or cigars into ashtrays, alcohol-induced laughter and the loveliness of friends who gather, and danced the Cha Cha. I learned how to Cha Cha. I still remember how.

Grandma traveled with a handle of vodka. I celebrated her life the day she died with three vodka martini’s. I did not feel well the next day, but I did feel close to my Grandma. The price tag was not too high.

She loved her drinks. And when she was a widow, an old lady in her 80’s, and told me how she was told not to drink, I remember telling her, ‘shit, in my opinion if you make it to your age, you can do whatever the hell you please.’ She loved me for that, I think, and for so many other things.

I was loved by her inordinately. I loved her especially. She drove me out of my fucking mind.

My family located to Massachusetts when I was nine, but we made the drive to New Jersey on a regular basis to spend time with our family. As an adolescent, I only wanted to spend time with my aunt Beth, only a year older and my mother’s youngest sister. Grandma would always cringe and complain when I told her I was going to spend the night with my ‘other’ grandmother. I went anyway.

After Grandpa died, she became the visitor, and she would visit me sometimes for weeks at a time taking over my family and our perfectly organized schedules and wanting to come with me every where, even almost following me into the bathroom. Her greatest joy, though I feared for the safety of my house, was cooking for a family again. She would make brisket, gravy or spaghetti sauce and garlic bread, hors d’oeuvres (which we called horses ovaries when I was a child), and smile with purpose again. I hooked her up with the senior center in my town and she would spend afternoons there playing bridge, and flirting shamelessly, I am certain.

Grandma loved hugs and told me once that the worst part of getting old was that she no longer had anyone to hug. She loved big. Sometimes I only loved small in return. She had such an inordinate amount of need in her hugs, and I felt I’d drown. As her visits got lengthier, I would turn in as early as I could in the evening, close my door, turn on the television just to get away from her never-ending demand for attention.

Grandma was rarely appropriate. She tried to pick up waiters, gas station attendants, even the butcher, and she used language around my young children that made me uncomfortable. She told me to never ever wear sweatpants out of the house again when spying my car pool attire one day. She called a spade a spade and made no apologies. I listened to that one. She reminded me how much I was letting myself go as a young mother, and though it would be years before I fully appreciated her wisdom, she knew well how hard I was working to hold on to any kind of independent life.

She spent hours showing me all the things she wanted to leave me when she died ignoring my shuddering, because I could not would not imagine a world without her.

Grandma loved telling everyone that she was born the year the Titanic sank.

One of her last lengthy visits was when my daughters were quite young, Hannah perhaps in second grade. She had arrived with a cold and became sicker and sicker with each day until one day when I went in to check on her, I thought she was dead. Her pallor was pasty and breathing ragged and she barely moved when I asked hesitantantly, “Grandma?” I was terrified out of my mind. I brought her to my doctor then we went to the emergency room and finally back home. She had pneumonia and at one point said, “Robin I was so frightened. I thought I was dying.”

Grandma may have come for a few more visits, but after that I mostly remember going to see her when she was visiting my father. If caller ID announced her call, there were times, God forgive me, that I did not answer. Her cloying need to be loved was something I could not always handle. I am not proud of that.

Still we spoke on the phone as often as we could until she began to lose her memory and could only remember things from long ago, and not today. She often forgot I was divorced. It was painful, but I didn’t try to correct her. She was confused enough. My daughters always got on the phone with her and ended each call with “me too, me too!” in exclamations of love. She was GG to them, not Great Grandma.

Grandma gave me $10,000 when I was a young married woman, and told me to put it away, keep it for ‘mad money,’ for independence. She was a wise woman. Because of course, she knew only too well how a woman could be left with nothing at all to hold onto after giving everything she had to give.

Before Grandpa died, she was his primary care-giver, lifting him out of bed, getting him to the toilet, cleaning him when he soiled himself, and endless other physically and emotionally demanding tasks. When years previously, he had his massive heart attack, she told me that after so many years of marriage, “it wasn’t about love any longer as much as it was about a shared life, a shared history.” She was beside herself when he died. She mourned deeply when he died, feeling most upset because she could not sense him any more. She said she could not feel him at all.

Grandma was a devout Catholic and when I was a little girl, we all went to church together on Sunday. I even went to Catholic summer camp where we sang, “Michael, row the boat ashore, hallelujah,” but I was not fond of her church in Clark. As a young adult, I went to the student’s folk Mass at Bridgewater State College, trying to feel as if I belonged, but I never did. I always felt like an impostor.

I converted to Judaism about twenty years ago, and Grandma was the only family member who immediately embraced my choice, saying “I really don’t care what you believe so long as you believe something.”

My world is missing a complicated vibrance today. Grandma died three months shy of her 100th birthday, a tough old bird with lots of grit in her veins and a generous heart that never forgot how to love a granddaughter who sometimes couldn’t remember how to love herself.

She used to joke that she would haunt me when she left the earth. And I so pray that she does. 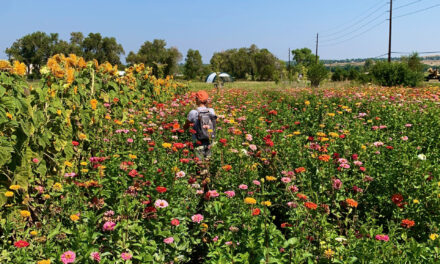 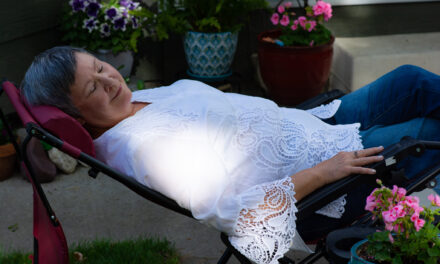 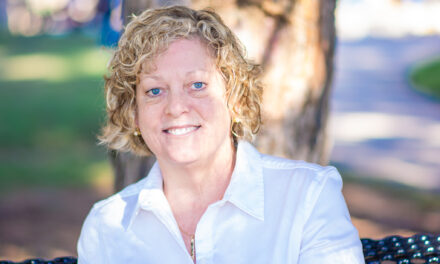 The Status of My Swim Challenge: Eight Weeks In